Thieves on the run & semi towing needed in Daytona Beach

Just when you thought you’d seen it all, some thieves with a stolen trailer decided to kidnap a skid steer off a construction site near Highway 95 Daytona Beach Area. The thieves didn’t even make it 2 miles out before rolling the skid street and trailer over on the highway causing a big mess. They then fled the scene and soon after, our semi towing team was called for help. It was just 5 am in the morning when Universal Towing received the call from Florida Highway Patrol. Luckily, we provide our customers with 24/7 semi towing services and we came to the rescue straight away. One of our expert semi towing team members rolled out of bed, got dressed and went out there with one of our 550 medium duty trucks. He did what he does best: semi towing and vehicle recovery. Our semi towing team member assessed the situation and patiently waited for the owner of the machinery to come out and take photos before doing anything else. Once that was done, our semi towing expert dealt with the rolled-over trailer, winching it onto a flatbed. Then, he did the same for the skid steer and thankfully we can state that after recovering from the shock, both vehicles are doing just fine. A big thank you is in place to our towing champion that went out there at dusk to deal with the situation. To the thieves we’d just like to say, ‘Never try to steal a skid steer if you don’t know how to drive it!’ or even better, ‘just stay home and find something better to do with your lives’. Well, it’s another beautiful morning here in Florida. Let’s have a coffee and get on with work!’. 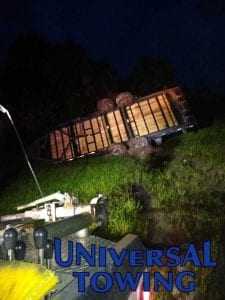 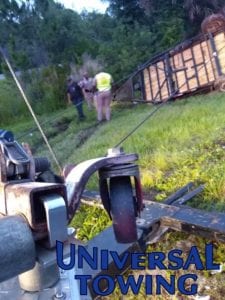 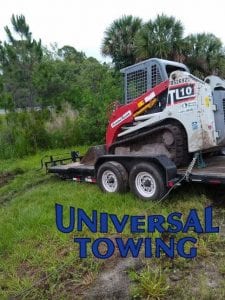 Details of semi towing on Highway 95 in Daytona Beach Area