Our Flatbed Picks up Shed in Tow Truck Service

Sometimes it pays to use a tow truck service instead of tearing a building down.   Last week Universal Tow Truck Service was hired to move a shed from one site to another.   We think its important for people to understand that a tow truck service can move many different kinds of properties that might not seem to be so moveable.

We used a heavy wrecker to lift the shed. We used a one ton truck to keep the shed stable in the air and provide support and a trader to haul the shed away.  Thanks to Ken and his team for this great story. 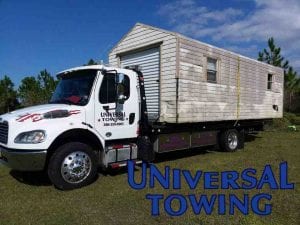